I pulled into my driveway two weeks ago and heard a familiar sound.  The call of a sandhill crane flying overhead.  There were actually two calls which meant the pair that have been returning to our cornfield year after year survived another migration.

Sandhills are not endangered by any stretch of the imagination.  My  friend Kay just returned from a wildlife refuge near Kearney, Nebraska.  She saw thousands upon thousands of sandhills, an estimated 500,000, coming back to the states from their winter homes.  The skies were dark with birds in the photos she took.

The whooping crane is a species that is endangered.  Groups like the International Crane Foundation and Operation Migration are working to reintroduce the whooping crane back to North America.

For many years the whooping crane program was located in the Necedah National Wildlife  Refuge in Necedah, Wisconsin.   The folks at Operation Migration worked with the chicks that hatched each year, teaching them to follow behind an ultralight which would lead them to Florida,  imitating migration south in October.  The hope was the young adult whoopers would return in the spring on their own. 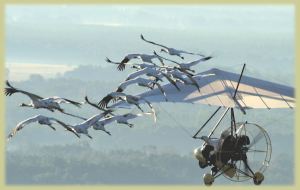 I’ll never forget my first trip to Necedah one cold  October morning.  Kay and I drove up hoping to watch a practice flight of cranes with an ultralight. The flights don’t always happen.  If the weather isn’t right the ultralights don’t fly.

We got there at 6:00 am and waited for the sun to come up.  At about 7:00 we heard the sound of engines on the horizon.  Just after sunrise three ultralights came into view with 6-7 birds following close behind each ultralight.  It was easily one of the most memorable sights I’ve ever seen.

The reintroduction project is very expensive work and Operation Migration could use your help.  Please consider making a donation here.

Stuff That Needs To Be Said

Just like the horse whisperer - but with more pages

Thoughts Meant to be Shared

A sciencey blog for the curious ape

Teenage Conservationist
Let it come from your heart
somanyblogssolittletime.wordpress.com/

A good story can transform the way that you see the world.

The greatest WordPress.com site in all the land!

A collection of ideas, tips, and inspiration on matters of design in today's world.

The Center for Humans & Nature Blog